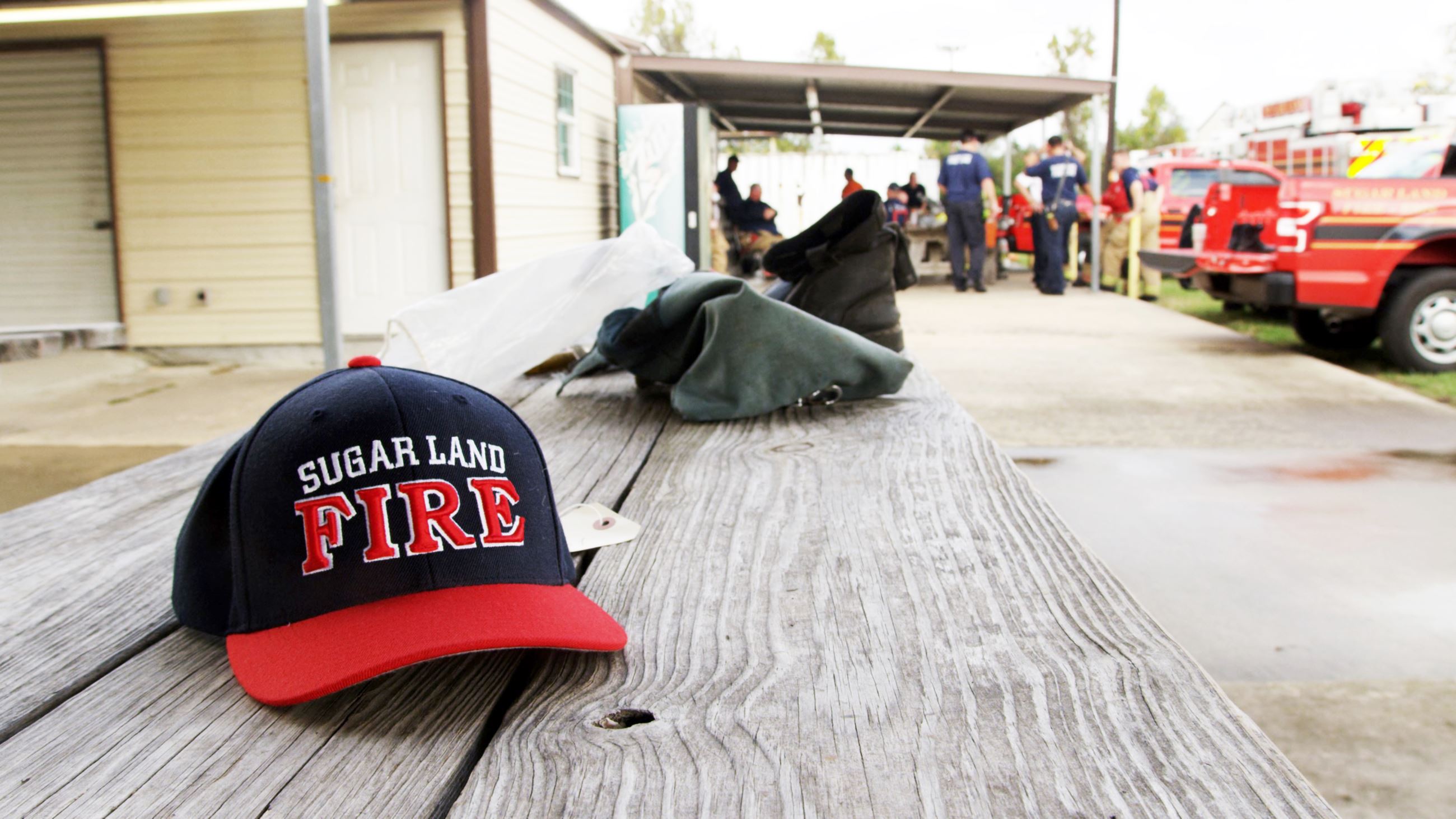 Seven firefighters took off their blackened masks and wiped the grime off their foreheads. They sat down at a bench across the street from the vanishing smoke and looked toward their battalion chief. Some took bottles of chilled water and emptied it on their faces; others mixed the water with Gatorade to replenish their electrolytes. Under temperatures that reached more than 100 degrees in the shade, the crew had just extinguished a one-room fire in a brick house.

Exhausted, they debriefed and took a 10-minute break.

“All right,” the battalion chief said. “Let me go light another one.”

He put his gear back on and, with matches in hand, went back into the house the crew had just extinguished. This time he ignited two rooms and placed a training dummy “victim” inside.

Sugar Land firefighters active in the field are required to train a minimum of 18 hours per year in a live setting. SLFD doesn’t have a training facility in Sugar Land so the department sends its crews to the Fort Bend Fire Field, a training facility in Richmond about 10 miles outside city limits. The fire field spans a minimum of two acres, according to standards set by the National Fire Protection Association. Access to the field costs the fire department $3,000 to $4,000 per year in use fees.

“The field training is sometimes hard to do because it has to be multi-company training,” Sugar Land Fire Department Chief Doug Boeker said. “We have to coordinate blocks of time.”

The Sugar Land Fire Department hires two types of in-the-field employees: firefighter-paramedics, who have all of their training and are certified by the state before joining, and paramedic-fire recruits, who are certified on emergency medical services (EMS) but don’t have fire training.

Firefighter-paramedic new hires train in the classroom and at the Fort Bend Fire Field, which can take up to four weeks to complete. Paramedic-fire recruits are sent to the fire academy, which mostly consists of classroom training. Recruits then participate in hands-on training as they progress, Boeker said.

“We have to bring them in and calibrate them to our way of doing things,” Boeker said.

All new hires do their hands-on training at the Fort Bend Fire Field. The fire field is equipped with a one- and two-story complex, cars and courses for firefighters to be able to maintain skills needed for field work.

An ambulance must be on stand-by during live-fire training, according to NFPA standards, which takes meticulous coordination as five ambulances service Sugar Land. Officials need to ensure enough ambulances remain available to respond to emergencies while training is happening, Boeker said.

“It’s not a very forgiving process if you don’t make the time requirements (of responding to a call) up front,” Boeker said. “Those first few minutes of that incident really affect how long or how well or how bad (the situation) is going to go.”

The City of Sugar Land staffs seven fire trucks every day, which can bring about some training challenges. Sugar Land firefighters train “on-duty,” during which, if an emergency occurs, they could be called to the scene if needed.

“We say that they are on duty, but when they are out there, they are technically off-duty because they aren’t available to respond,” Boeker said. “If they are out there training (and) a big call happens (in Sugar Land), most of our mutual aid (from other surrounding cities) will beat them in before they can get there … By the time the cascade from call to someone actually being on the scene happens, we are behind.”

The seven firefighters loaded two fire trucks and circled the fire field on a dirt road. They waited for the signal and then pulled up to the now-burning building. Smoke billowed from the windows. Hoses in hand, the firefighters got them connected to the hydrant nearby and went to work.

The firefighters training at the facility were lucky to not have an emergency call come in. They finished up their training for the day and drove the 15 to 20 minutes back into town.

“Training to be a part of the Sugar Land Fire Department is not an easy thing to do,” Assistant City Manager Doug Brinkley, who oversees the fire and police department, said. “We want the best and brightest on our team so we strive to make sure they have the training and tools they need to succeed and keep our residents safe.”