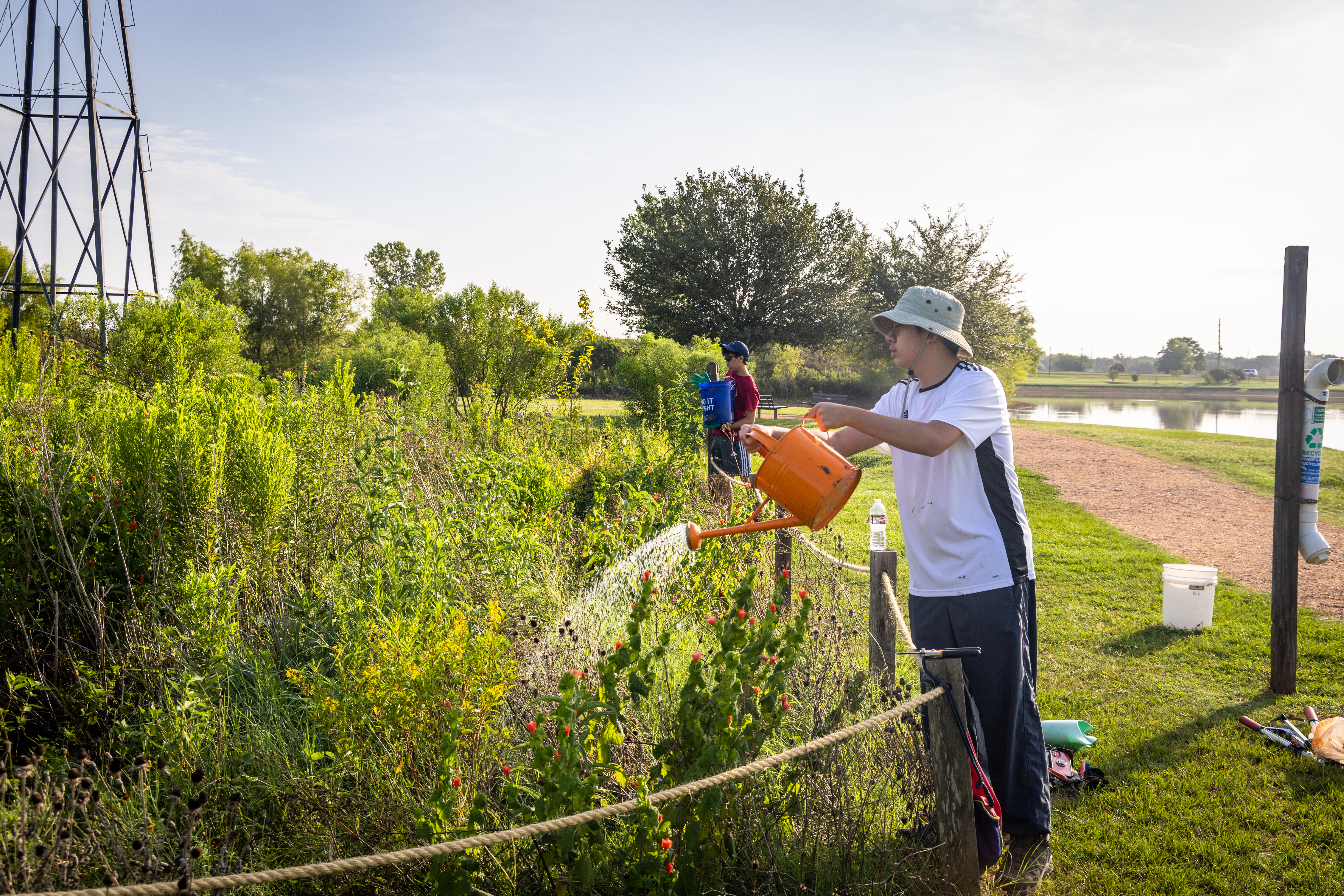 Residents had been itching for a butterfly garden long before Sugar Land Parks Development Manager Fenglin Du started working for the city in 2016.

“A lot of our residents had approached the City about a butterfly garden before I came,” Du said. “The first people who worked on it were William (Hajdik, Assistant Parks and Recreation Director) and a summer intern at the time. I helped a little but it was really their project.”

By the time the summer was over, Du was part of the butterfly garden team. While there were no resources to really take the garden to the next level at the time, leftover funds from the Parks maintenance funds were used to buy pollinator plants and start building out the garden to what it could become.

“There wasn’t a designated budget for it,” Du said. “We were squeezing whatever leftover funds we could out of other projects if there was leftover. We really wanted to see it grow and thrive so we did what we could.”

And now, six years and hundreds of volunteer hours later, Sugar Land’s butterfly garden is flourishing as part of the Sugar Land Memorial Park ecosystem. But that doesn’t mean it has been without difficulty.

The garden struggled due early on due to storms like the Tax Day floods in 2016 and Hurricane Harvey in 2017. Du said it was difficult to get the garden established amidst these extreme weather conditions.

The City had received a donation from a group called Monarch Gateway, a non-profit aimed at creating pollinator habitats across Texas. The weather established pollinator plants and seeds – which then grow and attract pollinators like bees who move pollen from one plant to another to fertilized growth – to be delayed.

“When the pollinators and the monarch butterflies fly by, the more habitat they can encounter, the better they survive,” Du said. “We definitely don’t want the pollinator population to not survive, so we needed to make sure we had the right environment for them.”

“That time was really the time that helped the butterfly garden,” Du said. “We had very generous funding from that grant, and then the next year, William got in touch with Houston Wilderness, and we got about $7,000 to buy more pollinator plants and seeds. As we grew more plants, we were able to recruit more volunteers.”

Now, Du said there are about 15 to 20 volunteers – mostly students from area high schools – who regularly join to help pull weeds, water the plants, and maintain the overall wellbeing of the butterfly garden.

Two 50-gallon storage tanks were recently added onsite to store rainwater from a windmill at the garden and make the garden easier to maintain, while also being more water-wise. The butterfly garden doesn’t have a traditional irrigation system or potable water system.

Texas is an important gateway along the Monarch butterfly migration flyway, with the butterflies passing our area twice a year in the spring and the fall.

“This kind of planting strategy is actually more sustainable than other styles we’ve seen in our area,” Du said. “You are able to use more native, drought-tolerant plants – eventually you are going to save a lot of money in water so that’s good planting practice.”

The butterfly garden sits along a popular trail in Sugar Land Memorial Park, making it the perfect place to take selfies with your exercise partner or simply observe nature in its purest form.

“When the plants bloom, it’s really a good scene for people to see when they jog or walk by and learn about nature, which is good for their mental health,” Du said.

And while Du admits that one butterfly garden doesn’t really seem like a lot, she said the educational and demonstrational opportunity it provides is unparalleled.

“For the volunteers, who are mostly high school students, it’s an outdoor classroom,” Du said. “A lot of volunteers aren’t able to get together with their friends, so they’ll come out to the garden and get their hands dirty. Any time with plants is a good way to spend time with nature. A lot of students really see the benefit. I would consider that a social benefit.

Plans to expand the garden in the future include adding a pavilion and bench nearby so park goers can fully enjoy the garden out of the sun with Du hopeful for additional features in the future.

“We started at almost nothing … it was just bare ground,” Du said. “Now, a little success can inspire more success.”