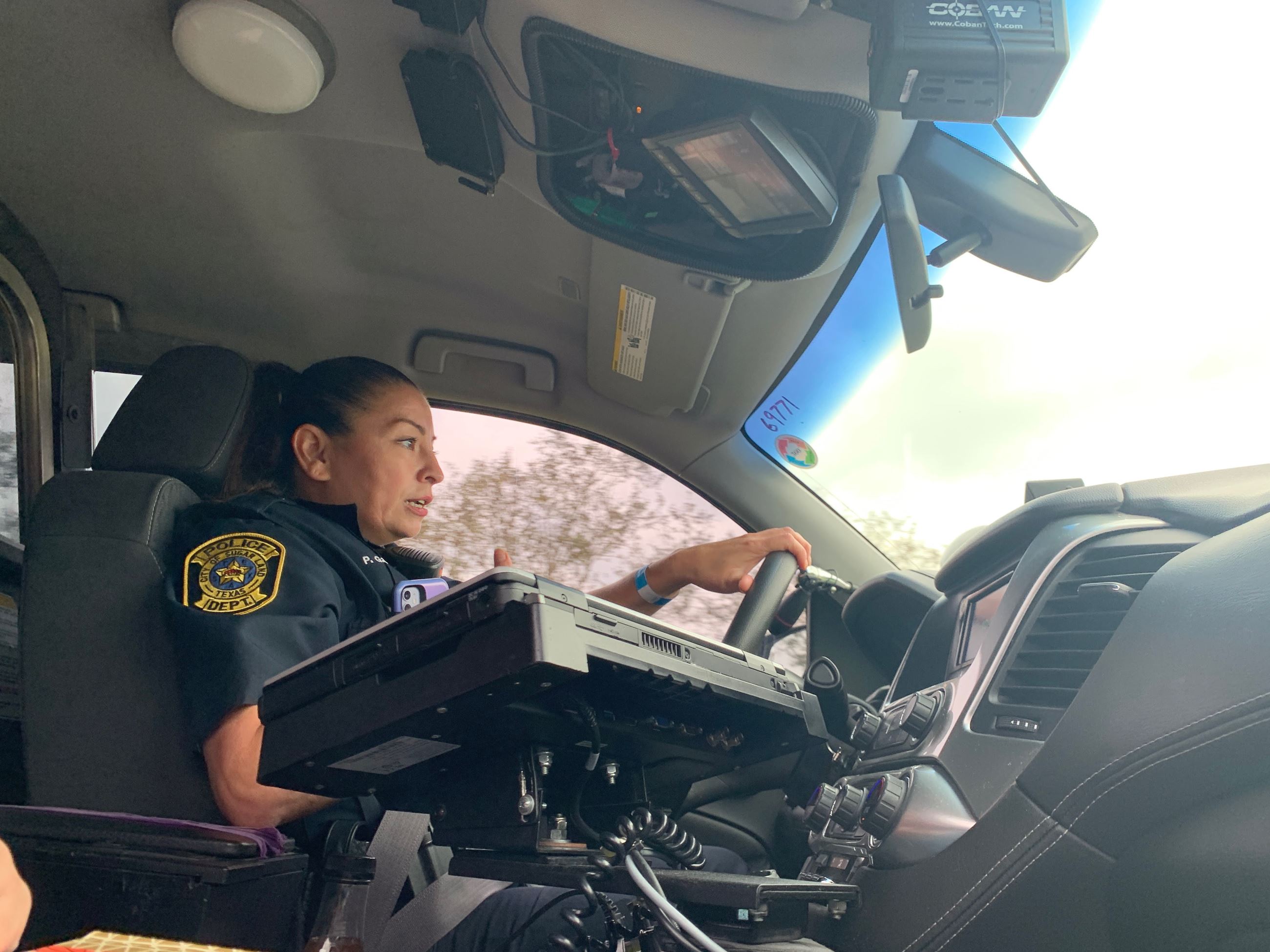 Sugar Land police officer Priscilla Garcia knocks on the door of a home tucked away in a quiet neighborhood.

With her gun, badge and mask handy, she takes three large steps backward as the door to the two-story, red-brick house opens. There’s nothing visible that makes Garcia consider her safety while backing away from the home – it’s what she can’t see that poses the greatest threat.

A masked young man in his early 20s opens the door with his eyebrows narrowed in confused look.

“Good morning,” the officer said, pointing at a gold Toyota. “Is that your car?”

The COVID-19 pandemic has crept through Fort Bend County and the rest of the world, changing how people interact, run errands, and conduct business. The men and women who make up Sugar Land Police Department and Sugar Land Fire Department were among the first to adapt to new protocols to prevent the spread of the virus.

In addition to increased maintenance and hygiene procedures, such as wiping down entire vehicles multiple times a week, temperature checks and wearing increased personal protective equipment, first responders have been put on the front lines of the COVID-19 pandemic interacting with residents who may have contracted the virus.

For firefighter and paramedic Jake Martin, it’s all part of the job.

The fear and stress level for residents is much higher than usual, Martin said, and that has contributed to an influx in calls. At the beginning of the pandemic the length of time spent on calls increased, as well, as crews learned to transition from working as a team of four, with one firefighter staying behind to man the truck, to working in pairs to minimize the risk of infection.

Martin said an average call lasts an hour or two. The first COVID-19 call he responded to in March 2020, from start to finish, lasted four hours because it was the first time the new precautions were implemented to prevent the virus from possibly spreading to the whole station. Now that crews are experienced with COVID-19 safety measures, the length of calls is back to normal.

“It’s tough because we [as police officers] can only do so much,” Garcia said. “We’ve had some sad calls the past couple of months dealing with mental health because it’s a tough time for people losing their jobs and stuff like that. It’s hard.”

Garcia said she is more cautious when interacting with residents in person and has to make it a point to stop and wash her hands periodically.

“When COVID first started, everyone was in a confused state because we didn’t know how serious it was,” Garcia said. “But we as officers are always precautionary. We don’t have access to wash our hands all the time – most days we’re going from call to call – so it’s different having to tell yourself ‘you have to wash your hands because you’ve been in somebody’s household.’”

But Garcia takes extra precautions even when she doesn’t step inside the house.

Before Garcia walked up the sidewalk to the two-story brick house with the gold Toyota parked outside, she squirted sanitizer onto her hands and adjusted her mask.

Now, she stands 10 feet away from a resident who’s wearing a mask of his own.

It turns out the car is his. He’s back in town living with his parents because of the pandemic. He goes to school in New York but he hasn’t really gone anywhere and there’s not enough room in the driveway for his parents to get in and out of the garage if he’s parked in the driveway. Garcia tells him to move the car around every once in a while so it doesn’t appear to be abandoned and bids him a good day.

She walks back to the police car and squirts some more sanitizer in her hand. She opens her laptop to enter notes from the call.

The pandemic has changed so much about the world, but the mission of the city’s first responders remains the same – to ensure the safety and security of Sugar Land residents.

“Onto the next one,” she says driving out of the cul-de-sac.