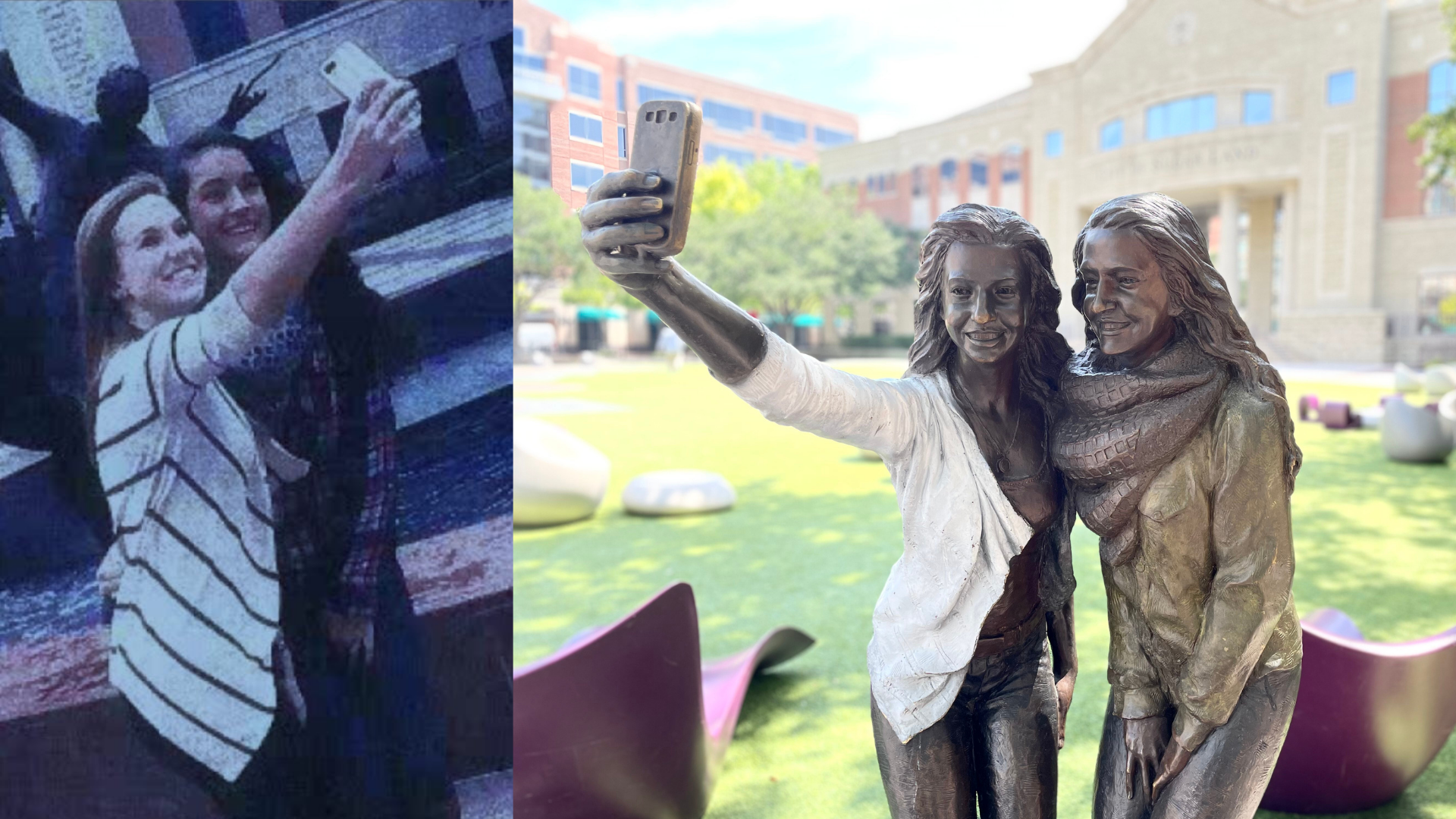 When Jim Browne, the former director of Parks and Recreation for the City of Sugar Land, volunteered his stepdaughter and her friend to model for a public art project he was working on, he thought it’d be “non-controversial.”

“One of things you use to measure the success of public art is its ability to generate some conversation or elicit a response to engage the community,” Browne, now a director at a private architecture firm, said.

“The ‘Selfie’ statue checks all those boxes in a big way.”

Sandy Levin, a prominent Sugar Land businessman, donated 10 sculptures that can be seen throughout Sugar Land, including ‘Selfie.’

“I never expected the negative reaction,” Levin told Texas Monthly in 2016. “Selfies are part of America, part of the world these days. It never occurred to me that people would think a sculpture of selfie-taking was anything other than cute.”

Browne said that he and his team at the City were cautious with the initial implementation of public art in Sugar Land, wanting it to “be generic but versatile.”

“The idea was really just to try and capture daily moment in time occurrences that would be commonplace in Sugar Land,” Browne said.

Sugar Land’s Parks and Recreation team saw different actions as representative of Sugar Land. A man playing a guitar in the plaza, an elderly woman reading a book to her granddaughter on a bench and, of course, teenagers taking selfies.

“My stepdaughter and her friends were always taking selfies,” Browne said. “I thought it’d be easy for them to get a quick picture.”

Morgan Cox, Browne’s stepdaughter, recruited Gabi Andrews, a friend of hers to take the picture with her. The two friends were born in Sugar Land, moved to nearby Missouri City when they were young and met in kindergarten.

“I remember it was a Sunday,” Cox said. “I was at church and on the way home he texted me and said ‘Hey, I’m working on a project for Sugar Land. Can you have someone take a picture of you and a friend taking a selfie in Sugar Land Town Square?’ He knew that my friends and I would go there every Sunday to eat lunch.”

Cox was in a car with four other girls. When they got to Town Square, she called out for volunteers to take the picture with her; Andrews was the only one to volunteer.

“We were just doing it as a favor for her stepdad,” Andrews said. “No one else wanted to do it so I said ‘I’ll do it!’”

They settled into the infamous pose — Cox holding the phone, Andrews squatting next to her to get in frame – and a stranger in Town Square took their picture. Cox sent the picture to her stepfather and went about her day.

“That was it,” Cox said. “I never asked any questions.”

“I remember we were right about to graduate high school when the statue was revealed,” Cox said. “And now, looking back, all my friends that were in the car that day were like ‘dang it, why didn’t we get out to take the picture?’”

Andrews remembers learning of the statue.

“I remember Morgan showing me a picture of us on her phone telling me that was us,” Andrews said. “It was pretty shocking to see. Then it blew up on social media.”

Media all over the United States got wind of the new statue in Sugar Land, flooding the City with both positive and negative feedback toward the statue. News outlets in London and Paris even provided commentary on it.

Browne said that he could see where some of the negative reaction had come from as the generation that embodied the selfie identity at the time skewed younger.

“(Selfies) hadn’t really gotten completely through all the generations yet,” Browne said.

And in the eyes of the City, ‘Selfie’ was an achievement.

“If you look at it from the goal of engaging the community, eliciting conversation and getting a response to a piece of public art, it succeeded on 1,000 different levels,” Browne said. “It’s phenomenal that we had that kind of impact.”

For both Andrews and Cox, enough time has passed that they can look back at the experience and laugh.

“At first, I was really glad that our names weren’t associated with the statue,” Cox said. “Some of the comments said that our daddies bought us the statue, or made fun of the fact that the artist used an Android instead of an iPhone. But now it’s such a cool piece of Sugar Land. Every time anyone that knows me goes to Sugar Land, I end up getting a picture of them with the statue. I think that is just so cool.”

1 comment on “Behind the Statue: The story of the real-life ‘Selfie’ girls”