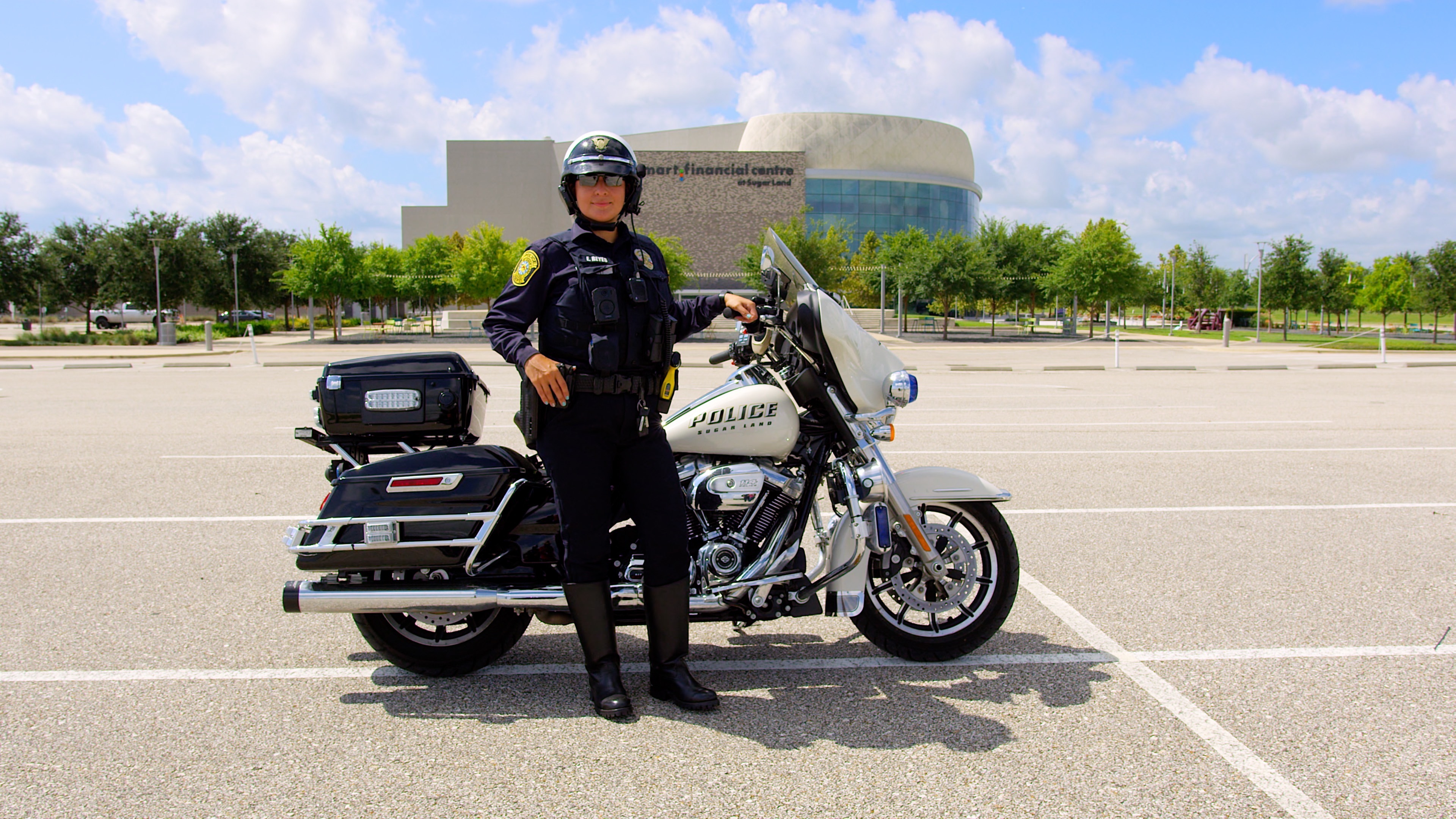 The first time Police Officer Elizabeth Reyes saw the motorcycle officers that were a part of the Sugar Land Police Department’s Traffic Unit, which focuses specifically on traffic enforcement within Sugar Land, she was in complete awe.

Reyes had six years of experience with the Army National Guard and one year in Iraq with Operation Iraqi Freedom under her belt before joining the Sugar Land Police Department in 2016. Even with that experience, she knew she had to join the motor unit. So, she bought her own motorcycle at the end of 2017 and began the process of learning how to handle it.

“I learned how to ride in a straight line basically from point A to point B,” Reyes said. “But then I would see the motor unit doing all these crazy turns and figure eights and really tight turns in small areas, I was a little intimidated by it.”

Her initiative paid off. Reyes became the first female in SLPD history to be a motorcycle police officer as part of the traffic unit in August 2021.

She started motor school in June 2021, which all traffic officers are required to pass in order to join the motor unit.

“Fortunately, the motor unit really helped me by giving me every bit of advice that I needed. They really helped me focus my determination and pick myself up from my bootstraps and keep marching.”

Since the switch to the motor division, she’s continued to focus on doing her job as safely as she possibly can. But the switch from driving a Tahoe on patrol to the motorcycle means that she experiences the road and patrol differently.

“In the Tahoe, you’re a little more comfortable–you have the AC, the good-time radio on. On the motorcycle, you’re constantly wondering ‘Does that person see me? Do they hear me?’,” Reyes said. “I think you become more aware of what’s going on around you. There are all kind of things that can go wrong really easily if you’re not paying attention,” Reyes said.

The difficulty of becoming a traffic officer also means that there is a camaraderie within the unit because they collectively understand how strenuous motor school is. The bonding has allowed Reyes, the first and only female traffic officer in SLPD’s history, to assimilate well with her all-male counterparts.

“It’s nice to know that there’s a lot of support in the community for a female to move into more specialized units that are typically male dominated,” Reyes said.

Reyes said that anyone interested in joining the Sugar Land traffic unit should be open to the experience, as difficult as it may be.

“It’s hard,” Reyes said. “But, at the end of that tunnel, there’s that light and you’re going to get there. Stay determined and don’t give up whenever something discouraging happens.”